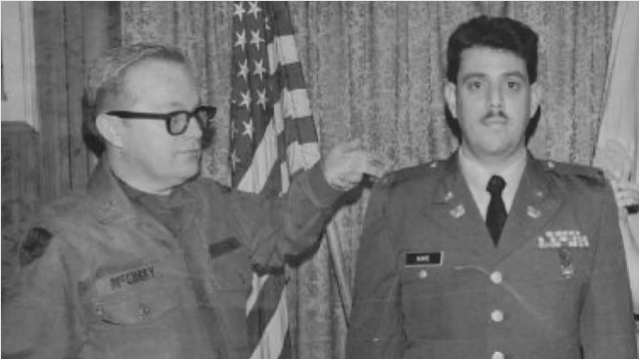 FREDERICK, Md. — He survived the Vietnam War and throat cancer, but 73-year-old David Kaye said it’s his child abuse that still haunts him.

Kaye said his father physically and verbally abused him, his mother and his two sisters for the first 12 years of his life.

“I’ve survived a lot in my life,” Kaye said. “I survived growing up in a tough neighborhood in Brooklyn. I survived 25 years in the Army, 214 parachute jumps and three combat tours as a green beret in Vietnam … In 2010, I was diagnosed with stage 3 throat cancer … and I realized one day that I hadn’t really survived my childhood.”

Kaye recalls moments where his father would break his mother’s jaw or threaten suicide if he and his siblings didn’t comply.

“My father was a philanderer, and every time my mother would call on him, my house would turn into a battleground,” he said. “He beat all of us. He would be verbally abusive.”

Kaye is not alone.

While there is a lack of data on how many kids were abused when he was growing up in the 40s and 50s, the Department of Health and Human Services estimates that nearly 700,000 children were abused in 2015.

“As I got older, I tried harder and harder to bury those things, and I think, I don’t know what brought them out, but they just started getting a little too much to handle,” Kaye said.

David said he thinks the PTSD from his stint in Vietnam compounded the feelings he had been avoiding for most of his life.

“I personally know 22 of the names that are on that Wall, and I watched three of them lose their lives, and you can’t ever erase that,” Kaye said. “It sticks with you forever. It’s just indelible. It’s in your brain. Won’t go away.”

After a series of high-stress jobs, his wife noticed him getting angrier and asked him to get help.

Kaye finally agreed to do so at the Heartly House, a haven for domestic violence victims and survivors in Frederick, Maryland.

Heartly House reports that since July 2018, the center has served at least 40 adults who experienced abuse as children.

“It made me understand a lot of things about myself that I didn’t understand before, and my wife says I’ve changed immensely since then,” Kaye said.

He said he survived two of the scariest battles anyone ever will face — war and cancer — and he admits that beginning to mend the wounds he suffered as a child was the toughest battle.

But Kaye said to try anyway.

“Deal with it,” Kaye said. “Get it off your shoulders. You have to deal with it, because it’s going to manifest itself somehow if you don’t.”

If you are in a domestic violence situation and need immediate assistance, call the national hotline.

Dear Friends and Supporters, Our community is facing an unprecedented situation right now, and there is understandably a great ...

The goal of the Heartly House Coronavirus Initial Response Plan is to protect the health of clients, staff, volunteers, ...

Heartly House is honored to have been featured in the 2019-2020 Greater Washington Catalogue for Philanthropy, recognized widely as ...

In celebration of 40 years of service to victims and survivors and to raise awareness to issues that have ...

If you are contacting us for services, please call our hotline number 301-662-8800 for assistance.